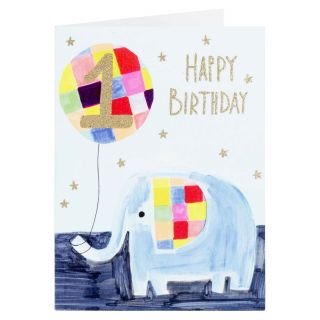 Today is Philip’s birthday. For those who started to follow this blog recently, Philip is the man I wrote about in the series of posts titled The Man On The Bench (1-5) and a few other posts after that series. Click the link HERE to read the first post in that series. For those of you who know the story you won’t need reminding.

I was getting ready this morning, and I simply had the words “Happy 1st Birthday” come to mind. I knew it was for Philip, and so while in town today I looked for a 1st birthday card.

Now it won’t surprise any of you that it’s very difficult to get a 55 year old man a 1st birthday card that isn’t very childish looking! But I did manage to find a card that was the least childish possible, and was mainly just bright and colourful. With a 1 in a balloon in the corner. As you can see above!

These are the words I was led to write in the card.

It’s said that if any man is in Christ, he is a new creation. That all things have been made new, and that you are “born again.” So with that in mind I want to say Happy 1st Birthday!

Being born again for Philip is not a cheesy Christian phrase. It’s a reality that he has been reborn from the man he was to the man he is now. If you had sat with Philip 6-8 months ago, and again today, the transformation is incredible. He has been born again a new man. Philip is now around 5 months off the bench. For those that don’t know what that means, it means he hasn’t had an alcoholic drink for about 5 months now. What a change there is in him, and how far he has moved forward! Father knew just what he needed. And he still knows.

Philip received 11 cards today. He said he’s never even got anywhere near double figures for cards in his life! He was a bit overwhelmed. That is connection. It’s a sign of a man who has gone from being isolated and alone to being connected. A man who could never accept that he was loved (by a heavenly Father or by any human being) to a man who knows he is loved and accepted and connected.

It has made me reflect today on the time since we first met Philip. I’ve reflected on the fact that we no longer have to sit on the bench in the cold, wind, rain, snow or burning hot sun for one thing! That is a blessing itself! In fact this last few months in helping other people, I’ve been reflecting on what I’ve learnt through Philip. The one word that keeps coming to me is this. Patience!

I was remarking to a friend from the States who I met with yesterday that if there’s one stand out hallmark in what I do as a result of Christ in me and him working, it’s patience. It seems to me that the people Father draws to me require patience in abundance! I love how Father is so specific in that. A phrase that became relevant every time Philip told me to give up and leave him alone, or told me not to waste time sitting on the bench with him was, “It’s not an option.” I think we had enough ups and downs to create the mother of all rollercoasters! But giving up was never an option for me.

I couldn’t. Others couldn’t. Simply because Jesus wouldn’t.

When you sit with people who are truly broken, whose lives have been filled with pain and hurt, and who do what they do because there’s nothing else that numbs the constant pain they feel, you realise that one thing they need is a friend who isn’t going to walk away or let them down. You also realise that many people have done just that to them, simply because they haven’t known what to do or they don’t understand why the person does what they do.

Something I learned when I volunteered with the Samaritans was never to say “I understand” or “I know how you feel….” And it’s something I continue with now. Even if the situation is something similar to my own life experience, I will never say I understand or know how that person feels in that situation. And we shouldn’t try to nor should we say we understand or know. It’s actually a ridiculous thing to say when you think about it! “I know how you feel.” I might imagine, but there is no way I can or ever will know just how the person in front of me feels. How I felt in a certain situation doesn’t mean they will be feeling the same. And so we can only allow the compassion of Christ in us to work and flow through us. We can only be the friend that won’t leave or forsake them. And that is more than enough.

Scripture says that God is faithful. It’s wonderful to believe that is true. But even more wonderful is to know through experience that God is faithful. It’s something I’ve mentioned before I think. Recently it has been of even greater relevance for me. If we live with the consciousness of Christ in us, and the Life of Christ working in us and through us, one of the attributes that we should express is faithfulness. I always maintained with Philip that it was not an option to give up. And in the last few months in particular I’ve found myself telling others that I’m not giving up, not walking away, or I’m not going anywhere. The promise that we receive in Christ in us is brilliant. “I will never leave you or forsake you.” It would be very easy to have done that. And as that is his promise, I’m finding that must also be my promise to others.

It’s not always easy. At times my head says one thing whilst my heart says another. Those that Father has drawn test my patience and my faithfulness. But thankfully what I learnt through Philip (and actually through my friend Glenn long before that) is to be faithful to the person Father has drawn to Christ in me. To be just like that prodigal father who runs to his son with open arms and embraces him; showing a person they are loved and accepted and not forsaken no matter what is an amazing blessing, both to the person and to us.

We have celebrated today with Philip and enjoyed his first birthday as a new man. It’s been a great day for me in recalling all that Father has done since we first met Philip in Aldershot in November 2017. In one sense it seems a lifetime ago, in another just like yesterday. But in every way it is a perfect reminder that He is faithful and that He will never leave us or forsake us.