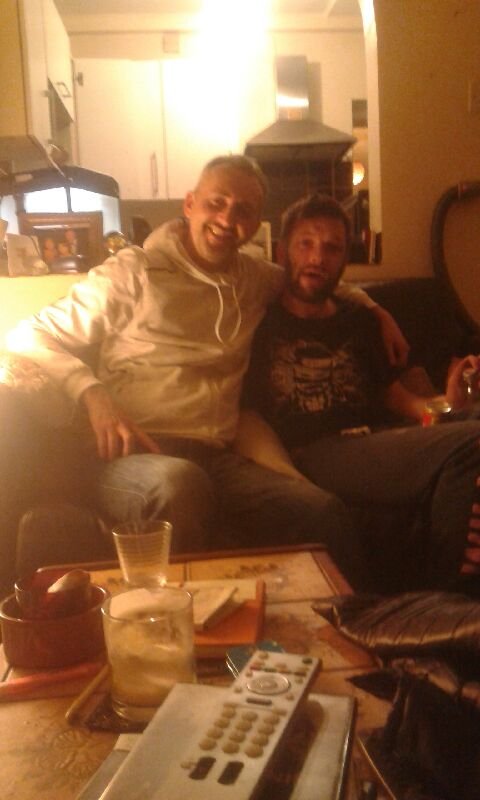 I would like to introduce you to someone who I’ve written about before. I woke up today and felt I should write something to honour him, and honour Father in all that’s been and is continuing to unfold.

I used a different name when writing about him (and for his mum too), as I always do unless I have agreement to use the person’s real name. I spoke to his mum today, and she gave her blessing.

So without further ado, let me introduce you to Lee (Paul in previous posts). The picture above is myself (left) and Lee (right). It’s a bit dark, but hopefully it’s enough to see him.

Yesterday we said goodbye to Lee. For those who haven’t read the previous post (“The Pit Is Deep”), Lee was hit by a van and died just over two weeks ago. But if you have read previous posts, you’ll know that Father has been doing a work in Lee and in each of us connected to him in recent months.

It has been an absolute privilege to sit where Jesus has been sitting and sit with this man. And yesterday it was a privilege to be able to speak at the goodbye service for Lee.

To be able to say goodbye with everyone who loved him yesterday was special. I cannot begin to explain to you how wonderful it was! From the moment I picked up Jean (his mum), and George (his brother) from Jean’s house, there was an incredible awareness of Peace.

It was yet another reminder that when Father starts something, he sees it through. We shared tears, not in a morbid, unhappy sense, but with a sense of joy. We shared laughter too. We celebrated Lee’s life. We remembered a man who, despite carrying a heavy burden of hurt and pain, still was able to make us laugh and smile, and somehow brighten up the world around him despite all he was going through.

Lee was a giver. A man with a kind, generous heart. I noticed in the last few weeks how he had begun to give to my two boys. He never met them, there were reasons he gave me why he didn’t feel able to meet them in person. But just a few weeks ago I arrived to pick him up to take him somewhere and he gave me the biggest bag of sweets for the boys. He said he’d been in the shop and bought them himself. That was a big thing for him in the circumstances. He wanted to bless me, and he also wanted to bless my boys. Just as he wanted to bless others. And I believe he did that much more in recent months as his heart opened to God and he looked differently at the world and the people around him. I’m convinced he was right. Lee became a messenger for God (see “The Pit Is Deep”). And he still is.

I think of the things I was able to share in the service that had a profound effect on me, and showed me the change that was taking place in him. One of the things I shared, the one which had the biggest impact on me is mentioned in the post “Blessing“.

Most of all yesterday, we were able to celebrate how Father had been drawing Lee to Jesus, and how he had made the leap from not believing in anything to believing in God and talking to God for himself. I’ve mentioned the privilege it was to sit with him. It was even more of a privilege that Father allowed me to see the change, and be a part of the story.

To talk to Jean when we got back to her house yesterday was amazing too. Hearing again how she too is experiencing the Life of Jesus for herself. She used words such as “overwhelmed”, “filled with peace”, “light”, and “happiness.” We also acknowledged how great Father is having put everything and everyone in place for her these last few months. She has new friends she never dreamed she would have just a few months ago. I even heard today that next week some of them are going on a girly night out with her! Amazing.

Jean said yesterday that I had to mention the last conversation she had with him on the phone, the evening before the accident in the early hours of the morning. Lee had called her to say thank you for helping him. She says it was a really lovely conversation, calm and peaceful. And the last thing he said to her as the call ended was “I love you mumma.” That has been a comfort to her too. That he said that to her, and that she was able to reply and tell him she loved him too.

While I was getting ready today, I thought again about jigsaws. Life might seem a bit like a jigsaw without a box for us at times. We know there’s a bigger picture. We know that the pieces fit together somehow. But maybe sometimes we’re wondering if all the pieces are there. Whether the picture will ever be complete? Or will we reach a certain point and find that there are pieces missing?

And what is the bigger picture? What does it look like?

If you know how a jigsaw is made, you’ll know it starts as a whole picture, and goes through a cutting process. The creator of the jigsaw sees the complete picture from the start. And this is the thought that struck me today.

Our Father is the creator, the One who sees the bigger picture from the start, and knows how each piece fits together. Every piece is unique, but a part of this bigger picture. We have to trust him that he knows and that, through Christ at work in us, he will fit all the pieces together. The simple and wonderful phrase that Jesus gave me sometime back comes to mind. “Father knows.”

There is a jigsaw that Father has been piecing together in recent months. It is a jigsaw that represents the story of Lee over this time. It started with him. It didn’t make sense at first. Now it makes so much more sense. Yesterday, more pieces of the jigsaw were pieced together. The picture became a little clearer, just a bit closer to completion. Father, as the creator who knows exactly what this picture looks like, well, I think he must be excited that it’s coming together quite nicely! And Lee is still an integral part of the jigsaw, and always will be.

Father chose this one man to do something amazing through. I want to honour Lee for who he was. Through Lee, Father taught me more about himself, about seeing others clearly, and about myself also. Many people who met Lee through his life didn’t see him as Father sees him. They didn’t have the the opportunity, the privilege to sit where Jesus was sitting with Lee.

3 thoughts on “Celebration of Life”