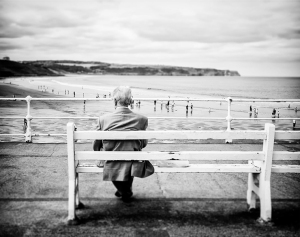 This post follows on from The Man On The Bench…

Each Monday I join Alan as he walks a cross around Aldershot town centre. On Monday of this week, Freddie, my brother from San Francisco, joined us along with my brother James, and Angela who often joins us for the crosswalk on a Monday.

Freddie carried the cross around the town centre on Monday. Here are the pictures to prove it! 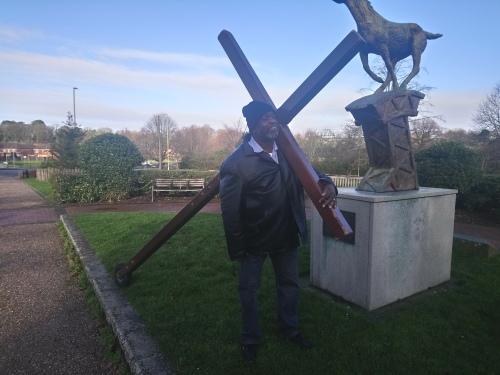 Meet Philip, the man on the bench. 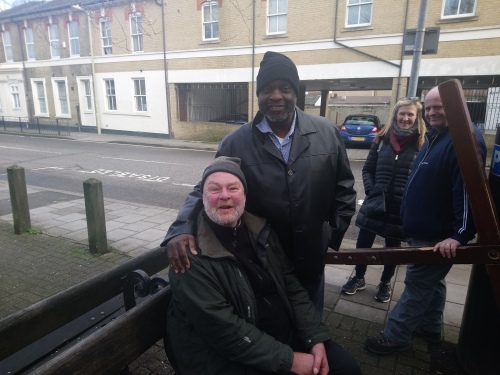 Philip is seen here sat next to Freddie. I love his face. I see Jesus in that face.

Philip’s conversation with Jesus continued on Monday. There was much shared by Philip and by Jesus. But there was one amazing moment in particular, so simple but incredibly profound that it might have been missed. Philip said that a couple of days before he had said to Jesus,

“Thank you for letting me into your Life.”

Most of us would say thank you to Jesus for coming into our life. And that is true, he does. But it’s so much more than that isn’t it. I found it so profound that this man who is talking with Jesus would thank Jesus for letting him into his Life. It’s that Jesus makes his home in us and welcomes us into his Life too. Those are amazing words.

In fact, Philip has been teaching me so much through his words. For example, Jesus was speaking to him and saying “Apart from me you can do nothing.” We felt he could respond to Jesus words, and begin each day by saying to Jesus, “Apart from you I can do nothing.”

And then Philip expanded further. “That’s so true,” he said, “Apart from you I am nothing.”

These aren’t the words that come from our intellectual mind. They aren’t words we read or learn from others. “Flesh and blood has not revealed this to you but my Father in heaven….” They are words spoken by our spirit, the spirit that desires to be one with the One.

The first time we met him, Philip prayed on the bench, and his first words were, “Jesus, be my sanctuary.” I won’t go into Philip’s life and all that has happened for him, but trust me when I say those first words were powerful and relevant for him. Those words came directly from his heart. Jesus desires to be his sanctuary, and I believe he aligned himself with the desire of Jesus and spoke those words.

You know that I like simplicity. I find Jesus to be incredibly simple both in person and in all that he says. And Philip is showing me more of the simplicity of Jesus. He is showing me what it means when we recognise just how Jesus values each person. And how the simplest thing can bring value and meaning to them.

This was how the permission to use Philip’s name and picture came about. Freddie said to Philip that he would be walking this through with Philip in the Spirit from San Francisco. That the church in San Francisco would be praying for him too. I mentioned to Philip that I had written a post about him but not used his name or given details about his life, and that the post had gone to different countries around the world.

His face lit up. And he said, “I’ve gone global. I’m international now.”

That’s what Jesus does isn’t it? You may never meet Philip in person. Perhaps you live in another country and will never travel to the UK and meet this man on the bench. But even reading this, you are connected. You can connect by asking that Father would continue to reveal his Son in Philip, the man on the bench. You can ask that Father would continue to reveal in him that he is a son, and that he has been drawn into the Life of Jesus himself. You can help Philip to know that he is “global” and for him to know that Jesus connects him to others who love him and care for him. So that he knows he’s not alone. 🙂