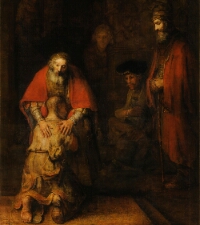 I’ve re-blogged this as today I’ve been hearing the words differently, not “Live like a son. Ask like a son,” as I originally wrote this, but “Live as a son. Ask as a son.” There is a huge difference between living like sons and living as sons! AnonCC33

The last few days I have had this phrase in my thoughts,

Anyway, the phrase is something that I said in conversation with someone, and it’s stayed with me since then. It’s come from reading and thinking about the words of Jesus, about asking the Father for anything.

“In that day you will ask nothing of me. Truly, truly I say to you, whatever you ask of the Father in my name, he will give it to you.”

Jesus is instructing us, showing us that we too can be a son of the Father. He desires for us to be so.

“And because you are sons, God has sent the Spirit of his Son into our hearts, crying, “Abba! Father!” So you are no longer a slave, but a son, and if a son, then an heir through God.”

The Father himself has sent the Spirit of his Son into our hearts, to live within us, to make his home in us, and to bring us home to be one with the Father.

Recently, I’ve heard a lot of talk about the Prodigal Son. Most of the focus goes on the younger son. A little goes on the elder son.

The elder son, he gets upset when the father holds a party to celebrate the younger sons return. The father says to him,

“Son, you are always with me, and all that is mine is yours.”

The elder son didn’t know he was a son. He knew what it was to serve. He even said that himself.

“Look, these many years I have served you, and I never disobeyed your command.”

We look at the younger son, and we see that he wasted his inheritance on wild living. The story is one of grace and mercy, yes. It’s a story of the Father’s love and mercy despite the wasting of our inheritance.

But here’s the thing. The story is about identity. At least the younger son knew he was a son, enough to ask the father for everything that belonged to him, as a son. At least he had the guts to ask, and he knew who he was.

Do I know I am a son of the Father? Do you? The Father gives Jesus himself to us. The Spirit of the Son is crying, “Abba! Father!” Jesus desires for us to ask the Father for anything, in his name. He says, “Don’t ask me, ask the Father, in my name.”

For an audio recording of this post, see below.