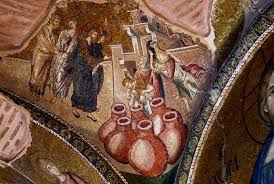 “His mother said to the servants, “Do whatever he tells you.”

This whole thing of listening is still very relevant I think. I haven’t perfected it yet. I still do things that he says not to. And I still miss things that he’s telling me to do. But I’m learning on the journey to listen better, and I’m picking up on the small, subtle things that he is saying much more.

That’s the important thing. Listening to his voice. Knowing his voice. Learning to listen better.

I’ve been learning to listen better since I began volunteering for a certain organisation, and in learning to listen better, that has helped me no end to hear and know the voice of Jesus in a new way. A short while ago I was asked to talk with a group about listening, and I remembered this video. When I watched it again, I felt it was very relevant spiritually to improve our listening.

Jesus and his disciples, along with Jesus mother, are at a wedding in Cana of Galilee. The wine runs out, and Jesus mother is aware of the need. Jesus dismisses it at first, saying that his time hasn’t yet come.

But she’s insistent. And she says to the servants, “Do whatever he tells you.”

You see there are two sides to this one phrase. Let me give you an example.

Recently I was sat listening to the story of a friend who had seen Jesus work while they were away. Long story short, through listening to the voice of the Father, a woman he met at the beginning had met Jesus and received Jesus by the end. It is a great story!

But as the time away was drawing to a close, my friend began to worry about what would happen after he had gone. There were thoughts about putting some things into place to ensure that this woman could meet with fellow followers of Jesus, to be encouraged and to grow. It was a good and well meaning intention.

And so my friend went and sat by a lake to ask the Father what to do. And the reply?

“You have done everything I’ve asked you to do. You can go home now.” There was nothing else to do. He was not to worry about the next part of her journey, he had done what the Father showed him to do. The rest was up to Jesus.

As I listened to my friend share this part of the story recently, the phrase that Mary spoke came to me. And as I mentioned above, there are two sides to that phrase.

The first is “Do whatever he tells you.” It means if he gives an instruction, then we had better follow that instruction to the letter. That is the conscious listening the Father is drawing us to, to live consciously hearing the voice of Jesus within us. To know Christ “as he is.”

The other side that is so well exampled in my friend’s story is this; “Don’t do what he doesn’t tell you.”

As my friend and I talked, it dawned on me that he had followed the instruction given by Mary. “Do whatever he tells you.” And thankfully when it came to trying to plan some of his own things, he asked and listened, and did what he was told to do. And most importantly, he didn’t do what he wasn’t told to do. He didn’t follow his own thoughts and plans.

You see, the Father is often pretty specific. And learning to know the voice of Jesus means we’ll know exactly what he’s saying to us whenever he is speaking.

Moses is also a classic example of this phrase, “Do whatever he tells you.”

The Lord speaks to Moses as they near the end of the time in the wilderness. He instructs Moses to speak to the rock, and water for the people of Israel and all their cattle would flow out. This was to be the second time water flowed from a rock for the people. 39 years after the first time, a rock will yield water again.

Perhaps Moses was distracted by the anger and complaining of the people. Perhaps he just remembered what he had done 39 years previously. Perhaps he was just so sure of what he was to do having been in this situation before.

And Moses did what he had done before.

The Lord was leading them into a new place, a new time, and with new ways of doing things. The sign to the people was that they were to listen to his voice, and “do whatever he tells you to do.” Moses missed that, and did what he wasn’t told to do.

Mary’s instruction is relevant for us today, both sides of it. Maybe we haven’t thought about the other side of it, the side that says “don’t do it if he hasn’t said it.” My friend and I were talking over the miracle of water into wine. Why was Mary so insistent? Perhaps she understood the importance of only doing whatever he told them.

What would have happened if just one of the servants had done things in a different way to the way he was told? Would the miracle have happened?

It makes you wonder.

Maybe the miracle can still happen. But maybe, just maybe, what he really wants is for us to know his voice, to listen to his voice, and to only “do whatever he tells you.”

It’s clear that at this time the Father is saying to us again, “This is my Son, my chosen one. Listen to him!”

Eat the Bread, drink the Living Water. “Do whatever he tells you.” 😊