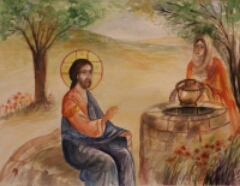 These are the words uttered by the woman who Jesus talks with at the well. She encourages the people of the town where she lives to come see this man, to meet him and talk with him as she has just done. They follow, they speak with him, and they too come to know that he is the One.

The woman is freed from the isolation that previously trapped her, and is now connected with others and, empowered by the Life she has received, she compels others to come to Jesus. She knows who she has met, she knows what that means for her. And she can’t keep quiet about him!

Yesterday something happened which I have to encourage you with. It is to say that Jesus continues to meet with the one and transform them today, removing them from isolation and transforming them so they too begin to say “Come see a man….”

Sarah and I were sat with Philip in Spoons in Aldershot. He continued to share with us what Jesus has done and is doing. And then we had the privilege of seeing the next part of John 4 unfold before us. John arrived to join us, and he very quickly engaged in a conversation with a guy sat at the table opposite. John was soon talking to him about people harming themselves with addictive substances, isolating themselves etc. I got up to briefly leave the conversation, and whispered to Philip that he’d be talking about Jesus soon, laughing as I said it. And he laughed as I walked away.

I think it was a set up. By John and by Christ in John, cause when I got back Philip was in full flow! He was telling this guy all that Jesus had done, how bad the Friday had been for him but how he had begged on the Saturday morning saying “Father help me, Jesus help me.” And how Jesus had done the rest. I remember leaving Philip in his flat on the Friday, and whilst he doesn’t remember saying the words, I remember him saying them. “I can’t do this on my own.” I knew he couldn’t. I just didn’t realise what that would mean for Philip the next day!

He spoke of how you can never miss what you’ve never had. You see, that has been a saying of his for 20 years he tells us. And he’s very clear. Jesus listened and heard him every time he said that. And he began to explain to the guy that Jesus tailor-made his healing for him, that it was specific for him as Jesus had worked in him so that he can say he’s never had a drink. He said that Jesus knew just what he needed, so that he doesn’t miss what he’s never had!

We are learning too. Last week, Philip went to Spoons on Thursday on his own. We spoke in the evening and he told me about his day. He said he sat in the sun in the beer garden at Spoons, drinking a latte (he now knows how to use the machine to take advantage of their unlimited refills, “a revelation” as he puts it!), and enjoying being still and present and appreciating all that Jesus has done for him. By the time he’d finished the fourth latte and thought about moving on, it was 5pm and he had missed doing most of the things he had planned! But he experienced something far more worthwhile. The presence of Jesus.

So when he told me in the evening about it, my head went like this. “I’m not sure if Spoons is the best place for him to be going on his own right now.” And immediately Father said to me, “Trust me, it’s OK.” You see I hadn’t fully comprehended all that Father has done for Philip. My own understanding kicked in. It’s right for us to be concerned for people and compassionate towards them, wanting the best for them and caring about their wellbeing, and guarding them at times too. But at the same time I hadn’t grasped just what Father had done through revealing Christ in Philip. I didn’t see the full picture and what it all meant.

I’m learning again in this: Trust in the Lord with ALL your heart, and on your own understanding you must not be leaning! 🙂

Back to yesterday. Philip spoke of how on the Saturday morning when he begged, it was as if Jesus said “It’s done” and he knew instantly that was it. We had not mentioned it, but Sarah and I had both heard Jesus saying “It is finished” yesterday morning.

Philip spoke of being resurrected. Nobody has said that to him as far as I know. Father is more than able to reveal Christ in someone without the need for flesh and blood to intervene it seems!

The guy at the table opposite just grinned, and you could tell that he wasn’t doubting Philip’s words. You can’t. There’s a conviction in them. “Christ picked me up and took me to a safe place.”

He asked Philip a few questions, and Philip always brought him back to Jesus. There was a fresh reality of experience that even we hadn’t heard from Philip. Yes, we knew what Jesus had done, but to see him speak with this guy (and us) with such conviction about Jesus and all that he’s done was beautiful.

John and Philip then tag teamed sharing the reality of Jesus with us all, shining their Jesus smiles at us and especially at each other, while Sarah and I just grinned and watched and listened. To see these two brothers together sharing Jesus in such a powerful way with this guy almost brought me to tears. I say almost, I managed to hold it. Just. 🙂

Sarah showed the guy pictures of Philip’s transformation over time, and then invited him to come meet with us on a Tuesday. Father, continue to draw him and compel him to come and meet the One! This is a little collage we put together so you can visibly see what Jesus is doing.

And so, yesterday we saw John 4 unfold a little further in reality. The man formerly known as the man on the bench now compelling others to meet Jesus.